The amygdalae are almond-shaped groups of nuclei located deep within the medial temporal lobes of the brain in complex vertebrates, including humans. Shown in research to perform a primary role in the processing of memory and emotional reactions, the amygdalae are considered part of the limbic system. 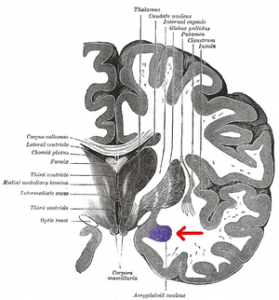 Future studies have shown been proposed to address the role of the amygdala in positive emotions, and the ways in which the amygdala networks with other brain regions.

Amygdala volume correlates positively with both the size (the number of contacts a person has) and the complexity (the number of different groups to which a person belongs) of social networks. Individuals with larger amygdalae had larger and more complex social networks. They were also better able to make accurate social judgments about other persons’ faces. It is hypothesized that larger amygdalae allow for greater emotional intelligence, enabling greater societal integration and cooperation with others.
The amygdala processes reactions to violations concerning personal space. These reactions are absent in persons in whom the amygdala is damaged bilaterally. Furthermore, the amygdala is found to be activated in fMRI when people observe that others are physically close to them, such as when a person being scanned knows that an experimenter is standing immediately next to the scanner, versus standing at a distance.

This site uses Akismet to reduce spam. Learn how your comment data is processed.